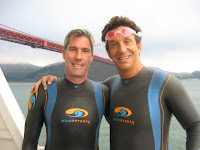 Todd Robinson of the La Jolla Cove Swim Club set a new men's record across the Catalina Channel from Catalina Island to the California mainland, completing his swim in 8:05:44.

Catalina Channel Swimming Federation observer Anne Cleveland reported, "What a swim it was! Todd put his head down and swam and did not stop until he crawled out onto some rather large boulders on the other side. His feeds were 3-5 seconds the whole way and every 15 minutes. He was fueled by Maxim. The sea temperature was 66-68˚F (18.8-20˚F) most of the way, but dropped to 60˚F (15.5˚C) at the end."

"Robinson took his training and preparation seriously for this challenge. I watched his pool and ocean workouts in awe. What struck me as most impressive was Todd's attitude about the whole thing. Just days before he swam, Todd said in an email, 'Even if the conditions on Tuesday morning turn out to be horrible, I will still consider this whole endeavor to have been a resounding success. From those miserable and frigid early season swims to today’s fantastic dolphin encounter, it has been a tremendous journey – one which has been a privilege to share with each of you.'"

You earned it! Now, about getting chicked...