One year ago today, the women's Olympic 10K Marathon Swim was held in Beijing. It was a classic race with everything: a fast sprint at the start, jockeying in tight packs, collisions at the feeding stations, attempted breakaways and a classic closing sprint and textbook victory by Larisa Ilchenko.

We went back to the Shunyi Olympic Rowing-Canoeing Park venue and asked a Chinese Olympic 10K Marathon Swim volunteer about the wonderful event. 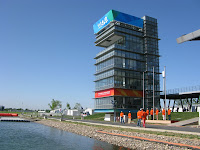 Q1. Who uses the Shunyi Olympic Rowing-Canoeing Park now?
A.1 It is open to public and is quite popular. People can go in there to enjoy the scenery at a cost of 20 RMB (US$2.92).

Q2. What were the best memories of the Beijing Olympics?
A2. How passionate the Chinese people were with everyone working so diligently. The most impressive memory was how crazy the Chinese people around the country were to watch Olympics. The Water Cube and the Bird's Nest were very impressive.

Q3. For Chinese volunteers at the Olympic 10K Marathon Swim in Beijing Olympics, what were the best memories?
A3. Just to feel the atmosphere for the athletes was great. When the Chinese won the gold medal in rowing, everybody was screaming on the stands in the rain.

Q4. Was there any interaction with the Olympic 10K swimmers face-to-face?
A4. Of course, we met a lot of them. Some athletes are very kind. Others were just so-so with a poker face.

But the smiles of the medalists were easy to point out.
Posted by Steven Munatones