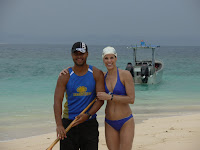 Hollywood actress Alexandra Paul, best known for her character as Lt. Stephanie Holden in the American TV series Baywatch, took a short break from her busy schedule to complete another solo long-distance swim in the 18 km Fiji Swims, finishing in 6 hours and 56 minutes.

Paul is shown with her paddler.

Paul seems to be working her way around the world westward as she first did a 10 km solo swim at the Bonaire EcoSwim in the Caribbean and then followed up with a 9.6-mile solo swim in the Maui Channel in Hawaii.