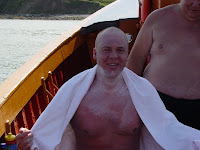 "Are you all ready, steady?" was the last question heard by the 10 solo swimmers and a two-person relay before the start of the 12K Cleggan to Inishbofin Swim.

Inishbofin is a tiny island 8K from Cleggan, a picturesque fishing village in western Ireland where 200 people reside.

The Bofin Swim Challenge certainly lives up to its name although the weather conditions were kind to the swimmers at the start. En route, most of the swimmers reported meeting jellyfish in varying quantities from 'loads' to 'millions'. Outside of Inishbofin, a strong current caused most swimmers to spend 30 minutes going nowhere.

Colm O’Neill, one of only nine swimmers to successfully cross the Irish (North) Channel between Scotland to Ireland and the only swimmer to do it on his first attempt, set a new record of 2 hours and 54 minutes.

Colm, shown above after his historic North Channel swim, said, "The Cleggan to Inishbofin Swim was my first major open water event back in 2001. It gave me the thirst to conquer bigger and tougher swims. However, no matter how many bigger and tougher swims I will hopefully complete in the future, it will always remain my favourite due to the organisation by Martin Cullen and the amazing hospitality and support of the people of Inishbofin."

The final results are as follows: