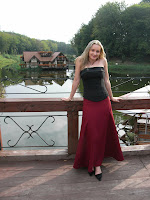 There have been only two Polish solo swimmers who have crossed the English Channel: Teresa Zarzeczańska-Róźańska in 11 hours and 10 minutes in 1975 and Romuald Szope in 1978 in 12 hours and 49 minutes.

Teresa, born in 1946, was a professional swimmer who took part in many competitions in Poland and abroad with very good results and some record times. After she retired, she coached a women's relay team "Wielkopolanki" that crossed the English Channel in 9 hours and 48 min in 1992, setting a new women's record and a double-crossing relay in 1993 in 20 hours and 48 minutes.

Katarzyna (Kasia) Frackowska, shown on left, who grew up in Slupsk about 20 minutes from the Baltic Sea, will attempt to be the third Polish native.

Kasia tells us that there are many open water races in Poland nearly every weekend during summer, mainly in the lakes in northern Poland with races that vary from 0.4K to 1K for younger swimmers to 2K-4K for older swimmers.

There are also open water races in the Balic sea including the Baltic Open Water Championships.