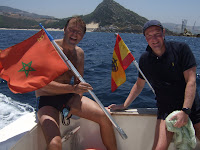 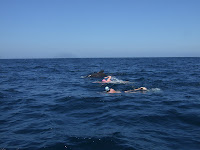 Tom explained their adventure, "You swim from Tarifa (not Gibraltar) to Morocco. It's 16K across. Rafael Gutierrez Mesa who runs the Strait of Gibraltar Swimming Association, is very friendly and speaks good English. They provided us with both a pilot boat and a smaller motorized support boat. You follow the pilot boat which goes 30-40 meters ahead of [you] with the support boat by the side to manage the feeds."

"In general, the English Channel swimming rules apply, but they don't mind taking small groups if the swimmers are the same speed - so that was perfect for us and makes it all a bit more fun." 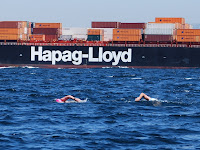 "This is a notoriously windy part of the world so you definitely need some luck with the weather. We got lucky as Thursday was a lovely day - not too much wind and very hot - about 38˚C. Our start time was set for 11 am so the Vaseline was turning to liquid in the hot sun and we lathered up with plenty of 50 SPF sun cream."

"The theory worked for us because our boat chart shows that we ended up swimming across in an almost straight line landing on the tip of Punta Cires in Morocco. We were surprised that the water was initially reasonably fresh - around 16˚C - but these are Atlantic, not Mediterranean, waters and there is also a marked contrast between the air temperature and the water temperature. It was also definitely colder on the Spanish side and got warmer as we progressed."

"So the swim started when we'd touched the rocks outside Tarifa harbour (by their rules, touching the coast on either side is sufficient, you don't have to clear the water at the start or the finish). We were expecting something between a 4-5 hour swim and decided to feed on every hour. There was a bit of chop, but conditions were pretty good and everything went like clockwork. Like the English Channel, there are two distinct shipping lanes and plenty of boat traffic so you get a good view of ferries on the way to Tangier and vast container ships passing in or out of the Mediterranean (see above). And if you didn't see the big boats you were certainly made aware of them being flung around in their wakes after they'd passed."

"On our two-hour feed, we were already over half way. I refused to believe this, knowing the woeful tales of English Channel swimmers who've been told "half way" when time-wise, they are very far from it. Just after this feed, we looked to our right and saw that we were being approached by a group of whales. Initially, I felt a little uneasy, but as the whales came parallel to us, they looked so docile and graceful that all fear was banished and we just enjoyed the moment. They were Pilot whales - like big dolphins - 5 of them including a mother and baby. They were obviously checking us out because they looped around and came back for a second time even closer so that I felt, had I dared, that I could have reached out and touched the nearest one. After a few minutes they dived and swam directly below us. Seeing these great creatures move so naturally and effortlessly through the water was amazing. It was just a wonderful moment and the highlight of the crossing."

"Stoked up by the experience the 3 hour feed came round in no time and we could now clearly see Morocco and it looked close. Sensing this, we upped our pace and went for it as the land came closer. We could clearly see the pilot boat heading towards a rocky point (Punta Cires) and before we knew it we were there standing on Moroccan soil and a little bit stunned that we'd got across in 3 hours and 34 minutes."

"Clearly our experience of this swim was very positive."
Posted by Steven Munatones

Simon,Simon, Simon....
Well done and in the middle of the season as well.
I Love the "well known founder".
COngratulations, that's damn fast