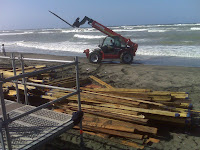 Strong winds and heavy surf caused by a squall during the women's 25K race at the 2007 World Swimming Championships in Melbourne led to the race cancellation mid-race.

The situation repeated itself in Rome where overnight winds and surf caused havoc at the seaside open water swimming venue.

The winds caused high surf and severely damaged the start and finish platform in Ostia, site of the 5K, 10K and 25K races. Large pieces of lumber were floating in the ocean, creating an unsafe situation and caused by the destruction of the pier.

The decision to postpone and reschedule the races were made by the FINA Bureau hours ago as the conditions were unsafe for the athletes. Additionally, in such conditions, piloting officials and media boats along the course, going at the speed of the swimmers, would be extremely difficult at best.

Like Melbourne, a race in the open sea always runs the risk of high winds, high surf, flotsam in the water and problems for the athletes, officials and TV production crew. The TV crew was removing its elaborate 7-camera setup from the shoreline which was unfortunate given plans for the live, high-definition coverage of the 5K, 10K and 25K races. 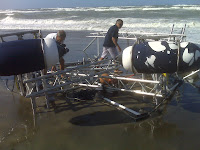 Even the steel-structure of the Omega timing system was bent, twisted and shattered by the waves. But the FINA Technical Open Water Swimming Committee and local organizers swung into action and made quick decisions to recover from the situation and go forward putting on a world-class event.

The FINA Bureau issued a statement the the races will be rescheduled as follows:

More information to follow as subsequent decisions are made.