Crossing the Strait of Messina 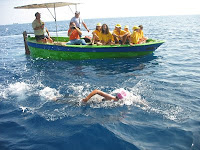 11-year-old Ilenia Andaloro set the second-best time crossing the Strait of Messina yesterday, finishing in 40:33, five seconds better than Lynne Cox did on her 1985 crossing.

The Strait of Messina is a narrow channel between the eastern tip of Sicily and the southern tip of Calabria which is on the Italian mainland.

It is good to see children such as Ilenia having the opportunity to do short-distance open water swims - this enables them to build upon their initial, enjoyable experiences in the future. We strongly advocate and support short-distance races (e.g., the Ocean Kids series of the New Zealand Ocean Swim Series) that many race directors around the world offer to young swimmers who are our next generation of open water swimmers.