Advantage To Brazil, Australia And Italy 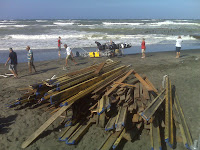 The winds that caused the initial damages to the open water structures (see photo on left) were measured at 35 kph.

The winds expected on the 21st and 22nd are forecasted at between 15-25 kph. But the winds are expected to pick up to 46 kph on July 23rd which would make event impossible to hold.

As a test, we swam today in 20 kph winds along the course. The waves were between 2-4 feet, the surface chop without pattern and the currents were significant, crossing the trapezoid-shaped course. If the wind conditions remain the same - or get worse as is predicted - it was apparent that swimmers who are well-versed in ocean swimming will be at a distinct advantage.

We are predicting athletes from Brazil, Australia and Italy will do very well under these conditions while swimmers who are more comfortable in flat-water conditions will most definitely be out of their comfort zone.

Certainly swimmers who effectively use the power of the waves to propel them forward - especially in the sprint coming into the beach - and who possess a high navigational IQ, especially through the heavy surface chop, will have the upper hand.

But everyone here at Ostia knows the first rule of open water swimming: expect the unexpected.
Posted by Steven Munatones