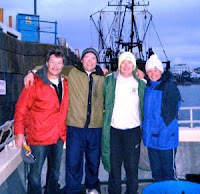 On June 20th, Carole Laporte, a teacher at St Ninian's High School in Glasgow, Scotland, organized a second relay try of 34 miles from End to End in the Isle of Man after a failure due to difficult weather conditions last year.

Carole from Brittany, was joined by three of last year's team members: Manxman Mark Gorry, Jim Boucher and Rory Fitzgerald. The foursome braved rough seas and jellyfish stings to complete the unprecedented End to End relay in a time of 12 hours and 44 minutes.

In 2005, Mark was part of the 5-person relay team which swam 19 miles from Whithorn, Scotland, to Point of Ayre to raise money for the Isle of Man Children's centre.

Jim said, "We started at 8:40 am in fairly awful conditions, closer to Force 5 than Force 4, about 1 meter of chop and a water temperature of 12°C. It didn't get much more than 13°C all the way. "The entire world population of Moon (or Crescent) jellyfish was there. In amongst the Moons, there were toy-sized Lion's Mane jellies (which can inflict an extremely painful sting), whose larger relatives only tended to be at the Calf Sound. It was a good exercise in getting used to swimming with jellies, though."

Carol summarized their experience, "The best part of the event was the team spirit. It was unbelievable that we went through this together. At the finish line, I can't tell you how it felt - what an achievement...and a relief! I was so proud of the team!"

Rory Fitzgerald, Mark Gorry, Jim Boucher and Carole Laporte are pictured from left to right in the photo above.
Posted by Steven Munatones