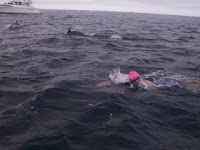 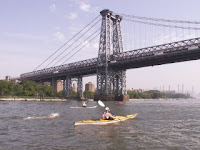 Unprecedented swims in the Santa Barbara Channel off the coast of California. A 120K triple-crossing relay of Lake Taupo, the largest lake in New Zealand, in 33 hours and 33 minutes. 14 hours and 51 minutes across the Alenuihaha Channel between the islands of Hawaii and Maui in Hawaii. A husband-and-wife joint crossing of the Au'au Channel between the islands of Maui and Lanai in Hawaii.

Few marathon swimmers travel so far and are successful as Penny Palfrey,

Often described as a grandmother by the mainstream press, knowledgeable observers of the sport look upon Penny as a formidable and savvy competitor who remains faster and bolder than many men and women half her age. Whether it is a world record relay attempt in New Zealand, an inter-island challenge in Hawaii or standard channel swims in Europe, Penny often goes - and succeeds - where few others dare.

Penny's next challenge will be a "reverse circumnavigation" of Manhattan Island on Monday where she will swim across the currents nearly all the way around New York City. Under the watchful eye of an experienced local crew, the primary issue is by how much will she break the record of Kris Rutford from Nebraska who swam the reverse course in 17 hours and 48 minutes in 1995.

Penny will start at 12:40 pm New York time on Monday afternoon where she will start her swim in the Harlem River next to Yankee Stadium. Her plan is to fight against the current down to the East River before riding the current down the East River to the Battery. She will again have to swim against the current at the Battery before the tide turns and assists her traveling north along the Hudson. And upon reaching Spuyten Dyvil (the junction of the Hudson and Harlem rivers), she will again have to fight the current for the final stretch back to her starting point. The current may be moving at 2 knots against her much of the way.