Round And Round She Goes 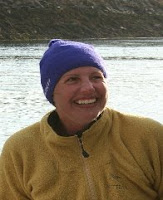 Legendary English Channel and Jersey swimmer Sally Minty-Gravett reported on the Island of Jersey's first major swim of its summer season: Lisa Freeman finished her 41-mile Round Jersey Solo in 11 hours and 9 minutes to become the first Canadian to complete a solo circumnavigation around the Island of Jersey.

Sally reported, "It was a great swim for her...the conditions were perfect and she was a star all the way around from all accounts. Lisa has been waiting patiently all week to swim. The sun has been up all week, but the high winds prevented it - until [today]."