Seaside Swimming In The Moonlight 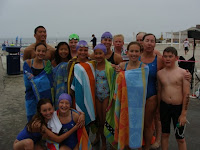 As the Northern Hemisphere summer open water swimming season starts to gear up, there will be more events that we are capable of covering.
While we wish we could cover every race and provide a platform for every race director to promote and publicize their event, the sport has simply grown larger than any one site to handle.

Because we appreciate everything about the sport, we find it equally as entertaining and enjoyable to cover local events as it is to cover the Olympics or World Championships.

This past weekend, we had the opportunity to cover the Moonlight Beach 1-mile Swim in Encinitas, located between Los Angeles and San Diego. The Moonlight Beach Swim was part of the Encinitas Sports Festival where thousands of participants and tens of thousands of spectators crowd the streets and shorelines to cheer on open water swimmers, triathletes, cyclists, paddleboarders, runners and other athletes of every age, shape, size and ability.

Like many early summer season ocean swims in California, the ocean temperature was brisk: 64°F (17.7°C) with a mist hanging over the Pacific. The steady 3-foot (1-meter) surf break hit the shore in chest-high water presented a bit of an obstacle for the less experienced swimmers. But, with no wind and a weak current running parallel to shore, the conditions could not be more pleasant for the open water swimming. The ever-vigilant beach guards - patroling the course in Jetskis, paddleboards and IRB's from four cities in the area - were at the ready, but the conditions made their job much easier.

The open water swimmers followed the thousands of triathletes who preceded them in the water. But as the morning mist began to burn off, the surf seemed to get bigger. Due to an occasional large set of waves, the race announcer gave advice for the swimmers to watch for holes in the sand as they ran in and out of the water. 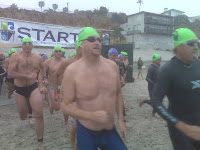 The race organizers purposefully set the start line outside the direct line of the out-and-back one-mile course, enabling the athletes to make a choice: swim directly in the water or run down the beach and catch a bit of the current to the first buoy. But, as the start siren went off, a large set came rolled in and the field simply dolphined their way straight out from the shore and then angled towards the race buoys.

Sean Swain a 38-year-old masters swimmer, and Tyler Anderson, a former swimmer from Long Beach City College, surged to the lead and led the pack for the entire race.

"After the turn, I tried to push the pace when I saw [Sean]," said Tyler. "As we were coming in, I was aiming to the left of the palm trees [at the finish]."

The two remained neck-and-neck as they swam straight towards the beach. "I saw [Tyler] and I was hoping to get lucky on my line at the finish," recalled Sean. "I am a pool swimmer and I started to look for the waves as we got closer to shore."

The two swimmers each caught a nice 3-foot wave on the outside that helped separate them from the rest of the lead pack. But, as the next set came rolling in, they both missed some nice surf.

"I got inside, but I didn't catch anything. I thought I could get a wave, but when [Sean] cut back in, we were right together," said Tyler.

As the two stood up together and started dolphining into shore, it was still anyone's game because the finish was 125 meters from the shoreline up a soft-sand beach. "I started to run and still had some legs in me, so I sprinted in," said Sean who pulled out the victory with a strong run up the beach.

As the rest of the field navigated their way through the surf and up the beach, the finish line was full of smiles intermingled with heavy breathing and a sense of accomplishment. "That was great. It was clear out there," commented Lea Scheppke, a 31-year-old from San Diego. "I could see kelp and it was pretty warm." 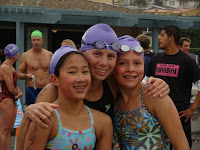 Grace VanDerByl, age-group coach at Pacific Swim Club in Poway (shown on left), took many of her young pool swimmers on their first open water swim.

"It was good. Fun. I was not worried, I just went in and did it. But running up the sand was hard," said 11-year-old Lindsay Beatty. "I totally want to do it again."


With the sport growing expotentially, Lindsay and her teammates will have plenty of more opportunities throughout the summer months.