Close Finish In The Red Sea 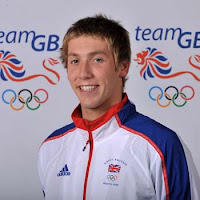 British 1500-meter Olympian Richard Charlesworth won the 10K race in the Red Sea in Eilat, Israel at the first LEN Open Water Swimming Cup this 2009 season in a typically close race, winning by 0.2 seconds over Brian Ryckeman of Belgium. The top four men finished within 1.05 seconds of one another.

"It was the speed from the last buoy that really made the differance. I was fourth with about 70 meters to go. It was a relatively slow paced race."

"It was quite choppy for about 400 meters of each lap and we did end up going off course once or twice," said Richard who was elated that he qualified for the 2009 World Swimming Championships in both the 5K and 1500-meter freestyle.
Posted by Steven Munatones