Back Swimming Safely In The Sea 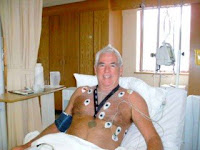 We previously posted a first-hand account from Cyrise Sanders about her hypothermia scare during practice in the Pacific Ocean.

Here is another dramatic first-hand account about hypothermia from Terry Griffin who successfully completed the 2009 Cadiz Freedom Swim in South Africa:

With a water temperature of 13°C (55.4°F) and a fog hovering over the channel, 60-year-old Terry described the race in vivid detail:

"After the first hour or so I lost complete track of time and distance...it was considerably more choppy and one really had the feeling of being in deep ocean. The field was much more spread out and...I began to feel that it was getting beyond a joke. After that, I stopped only to have sips of drink, and was not in a particularly good state." 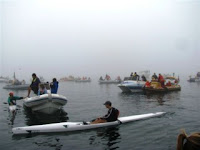 As Terry's core body temperature was gradually decreasing, he continued his description, "...I had no sensation of being very cold, and didn’t even feel very tired, but I was aware that my stroke was not strong and that I was battling to make smooth headway. All I wanted was to get to that damn beach..."


"...With about 1km to go I was in trouble. I was barely moving. I couldn’t discern any clear shapes on the beach. It was like looking at a mirage, everything hugely distorted and hazy, with brief flashes of the Cadiz finish banner. I had no idea where I was in relation to the shore."

Terry described his post-race recovery, "When I arrived in the emergency room at the beach, my core temperature was 27°C (80.6°F). They hooked me up to an ECG and noted that my heart was experiencing atrial fibrillation.

Technically, I was close to flat-lining."

"...Once I was settled on the warm bed I felt OK, albeit a bit like coming out of a deep sleep: groggy and slightly disoriented, not fully aware of what was going on around me. My lower back and buttocks were aching but the pain abated after about half an hour. I attempted to drink some hot chocolate, but I didn’t enjoy it and it seemed to make me slightly nauseous."

Terry's temperature recovery over the next two hours was as follows:

Terry continues, "...from the beach I was driven to the Cape Town Medi-Clinic and I was admitted to the Emergency Room where they hooked me up to an ECG, took my blood pressure and a blood sample, and a chest X-ray. At this stage I was still feeling reasonably normal, albeit a bit tired...

The blood tests showed a cardiac enzyme leak indicating that I had either just had or was just about to have a heart attack. I was sent straight to the Intensive Care Unit, where I was again hooked up to an ECG and put on a drip. They gave me a mild sleeping pill and I slept like a log...

Next morning, Monday, a new set of blood tests was done and these showed that the cardiac enzyme leak had dissipated and everything was back to normal. Nevertheless, a further 24 hours of observation was required just to make sure I didn’t relapse. The only drugs I received were injections to prevent blood clotting. On the Tuesday morning they sent me home.

A week later, I was back in the sea."