The Maestro of Messina 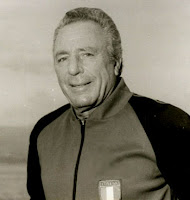 A series of open water swims are held in Sicily in the Strait of Messina.

The Strait of Messina is a narrow channel between the eastern tip of Sicily and the southern tip of Calabria which is on the Italian mainland.

Nino Musciumarra, known as the Shark of the Straits and the most important figure in the history of open water swimming in the Strait of Messina, sadly passed away this week. Nino Fazio has posted a touching tribute to Nino here.

The Sicilian long-distance swimmer almost single-handedly created the tradition of swimming across the tumultuous stretch of sea that separates Sicily from continental Italy. 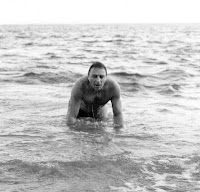 Nino lived life to its fullest, gaining nationwide fame as one of the pioneers of Italian long-distance swimming. From 1949 when he first crossed the Straits in a 12K race, he provided the Italian media with many stories as an individual of strong will and a rebellious spirit. He swam 11 Traversata dello Stretto races between 1954 and 1969, lending a helpful hand to all swimmers who ventured from around the world to the shores of Messina. Among those who he took under his wing was American Mary Margaret Revell, who was the first woman to complete a double-crossing in 1963. 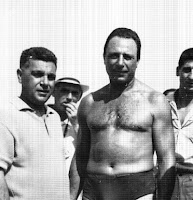 The Italian press nicknamed Nino the "Shark of the Straits" when he did a double-crossing from Mortelle in Sicily to Cannitello in Calabria and back to Messina in 5 hours and 22 minutes in 1964. He was the first person to swim from the Aeolian Islands to the coasts of Sicily (from Vulcano to Milazzo) in 1979 at the age of 58. His longer solo swim was from Messina south to Taormina, crossing the Straits in a longer way in 17 hours. In 1988, Nino swam across the Straits for the last and 24th time at the age of 67.

Besides his own exploits as a swimmer of the traversata*, Nino also organized, mentored, inspired and escorted many swimmers who challenged the Straits and other locations around Sicily, including open water hero Lynne Cox and Italian open water swimming heroes including Gianni Golini, Paolo Pinto, Leardo Callone, Pippo Nicosia, Agata Malvagna, Giovanni Fiannacca, Nino Fazio, Cristina Scotto and dozens of others of all ages. 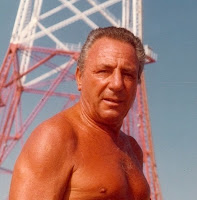 In his later years, despite facing a series of strokes, he never lost his good humor, his ability to inspire a younger generation with stories and advice and his inner strength.

Upon his shoulders and strength of character, the open water swimming community remains alive and well in the Strait of Messina.

Photos are courtesy of Nino Fazio.
Posted by Steven Munatones