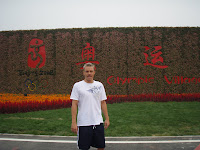 The American swimmers have arrived in the Olympic Village and all reports are that their dorms are great; new, clean and organized into rows. Each country has a group of rooms together in one building or, in the case of the U.S. and China, two entier dorm buildings.

Athletes from the different countries puts their national flags outside their windows and doors so everyone is aware of the nationalities housed in which building.

However, due to security reasons, the Americans cannot display the American flag. It appears that the security forces did not consider that, by process of elimination, people can figure out what building houses the American athletes.

But that has not stopped 10K swimmers like Mark Warkentin from constantly smiling as he enjoys his Olympic experience.