Michael's Legend and His Ties with Open Water Grows 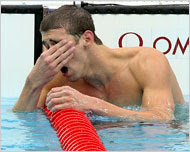 Michael Phelps had to race with his goggles filled with water as he won the 200-meter butterfly yesterday. "I dove in and they filled up with water, and it got worse and worse during the race. From the 150-meter wall to the finish, I couldn't see the wall. I was just hoping I was winning."

As all open water swimmers know, getting one's goggles knocked off or filled with water is a hazard of the trade - and it happens to the world's best.

At the 2008 World Open Water Swimming Championships, Vladimir Dyatchin of Russia recalled an issue with his goggles, "[The race] was very physical. They've put in big turn buoys which is not convenient. While you go around, you get hit and there's a lot of contact. My goggles came off twice and I had to stop to fix them."

At the 2007 World Swimming Championships in the women's 5K race, Germany's Angela Maurer said, "I have never experienced such a race before. I got hit during the second lap because the American [Leah Gingrich] suddenly decided to use breaststroke. Her leg kicked me in the eye, knocked my goggles off my head. I was swimming with one eye open."

And, in what was undoubtedly one of her swims that made Chloe Sutton into the Olympic swimmer she is today, Chloe's goggles were completely knocked off during the first kilometer at the 2007 World Swimming Championships. Yelling frantically for help and treading water in place, Chloe was eventually given an extra pair of goggles from the course officials who raced to her aid in a JetSki (as is allowed under FINA rules). Nearly 3 minutes behind the lead pack, Chloe gamingly put on her second pair and valiently attempted to chased down the pack. While she did not catch the top swimmers who were swimming together in the lead pack, she did catch several swimmers and demonstrated the spirit and determination that open water swimmers - competitive and solo - are known for.

Photo of Michael after the 200 butterfly by 2-time Pulitzer Prize winner Doug Mills of the New York Times.
Posted by Steven Munatones