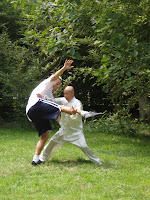 Mark Warkentin is working out hard (see below) in his build-up to the Olympic 10K Marathon Swim, but NBC did film Mark with a Tai chi master who demonstrated the Chinese martial art on Mark for a special piece that will be broadcast nationally at NBC.

thanks for the info about Mark's workout. I've been wondering what kind of workouts, on what kind of pace, the open water swimmers are doing.