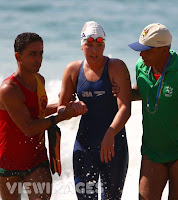 'Expect the Unexpected' is one mantra of open water swimmers, whether it is in the Olympic 10K Marathon Swim, a solo swim or local ocean race.

'Expect the Unexpected' is also the mantra of the media and general public when a new face or magical moment at the Olympics captures the attention of the world.

Can Chloe Sutton or Mark Warkentin become one of those individuals who is granted hero status by the media and sporting fans after a dramatic effort in the Olympic 10K Marathon Swim?

Or will a new Olympic hero be Natalie du Toit, Maarten van der Weijden or some other unheralded marathon swimmer?

Over the next 14 days, we’ll bring you some special insight from these special athletes. Starting tomorrow, we provide a detailed Q&A series with Chloe and Mark.

Photo by View Images of Chloe Sutton at the 2007 Pan American Games where she emerged victorious in the 10K against rival Poliana Okimoto of Brazil.