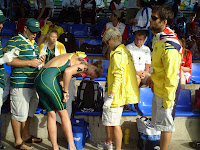 Melissa Gorman, Australia's sole female entrant in the Olympic 10K Marathon Swim, will also swim the 800-meter freestyle in Beijing a la Britain's Cassandra Patten, who will also do the double duty in the distance events.

Gorman qualified for Beijing in the Olympic 10K Marathon Swim by being the top Oceania qualifier at the 2008 World Open Water Swimming Championships in Seville, Spain. She got second in the Australian Olympic Trials in the 800 freestyle in 8:36.23.

Gorman is currently training in Kuala Lumpur, Malaysia with the rest of the Australian pool team and will depart for Beijing tomorrow. "It is very exciting, especially being the first time open water has been added into the Olympic Games. I mean it is being a part of history. Anyone in the race can win, so I like my chances."

Photo shows Gorman being assisted by Greg Towle, the Australian open water head coach and her teammates, as she places her gel packs at the bottom of her swim suit before the 10K swim at the 2008 World Open Water Swimming Championships.