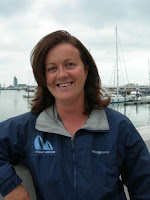 Anna Wardley truly gets around, having lived and worked in London, New York, Buenos Aires, Australia and Hong Kong.

Anna, former Head of Communications for Clipper Ventures, has done a variety of endurance challenges, including racing 36,000 miles around the globe in the Clipper Round the World Yacht Race in 2003, which had to be an amazing experience. But, in her own words, Anna found it "hard to beat the feeling when I finally reached France on my second attempt at swimming solo across the English Channel."

"I was so cold and exhausted when I made landfall at 1:10 am, after swimming for 21 hours and 20 minutes, that it was hard to appreciate what I'd achieved."

"I think the moment it finally sank in was when I was awarded the Van Audenaerde Trophy for the Greatest Feat of Endurance by the Channel Swimming Association that has been awarded to some of the greatest endurance swimmers in the world."

We look forward to seeing what she is up to next.