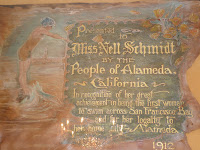 Meg Keller-Marvin of the International Swimming Hall of Fame provided a wonderful photo of an amazing pigskin award presented to Nell Schmidt, a pioneering open water swimmer, in 1912 by the City of Alameda, California (near San Francisco Bay).

The award is at Nell's surviving granddaughter's home in Bloomsburg, Pennsylvania.

The award reads, "Presented to Miss Nell Schmidt by the People of Alameda, California In recognition of her great achievement in being the first woman to swim across San Francisco Bay and for her loyalty to her home city - Alameda. 1912"

Nell is shown on left from a photo courtesy of the historical records of the City of Alameda.

In Tim Johnson's authoritative book on open water swimming, the History of Open Water Marathon Swimming, he sites a previous swimmer Hazel Langenour who reportedly swam across San Francisco Bay under the Golden Gate Bridge in August 1911 as recorded by the Dolphin Club and reported by the New York Times newspaper under the headline, 'Girl Swims Golden Gate'.

See Hazel in photo getting into San Francisco Bay on left from the Dolphin Club archives.

The article from August 20, 1911 with a San Francisco byline, reads, "Girl Swims Golden Gate. Miss Hazel B. Laugenour, Aged 19, First Woman to Do It. Miss Hazel B. Laugenour, a nineteen-year-old college student, swam across the Golden Gate to-day in 1 hour and 28 minutes. She was the first woman to accomplish the feat. Miss Laugenour clipped two minutes off the record set by Edward Caville, an Australian professional, in 1891, which stood until July 23 last, when Walter Pomeroy crossed the harbor entrance in 1 hour 24 minutes and 36 seconds. The Golden Gate is 1,500 feet wide at its narrowest point."

Upon researching this information, Tim said, "We are stroking the cold embers of a near century old controversy."

Whoever was first - or second, it was definitely in the pioneering years of open water swimming and both Nell and Hazel are to be honored and commended for their exploits. During this era, the opportunities for women to swim were minimal - the 1912 Stockholm Olympics were the first time that women (27 women total from 8 nations) were allowed to compete in swimming (100-meter freestyle and 400-meter freestyle relay) at the Olympics. The USA only sent 7 male swimmers to Stockholm - and no women - to the 100-meter course that was build in Stockholm Harbor.

Hazel L. couldn't have swum under the Golden Gate Bridge in 1911, as it wasn't yet in existence.