We had the distinct pleasure of watching the 2009 FINA World Swimming Championships in person and on the high-definition programs broadcast by Rai TV throughout Europe.

It seems that we were not the only people watching on TV. The cumulative TV audience in Europe for the 2009 Championships reached nearly 1.5 billion viewers. 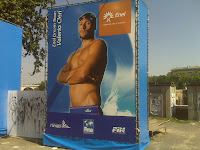 The 5K, 10K and 25K races were held in Ostia Beach under the very able leadership of Andrea Prayer who had to deal with the entire venue being wiped out by high waves and strong winds, but the open water competition closed with a very exciting and challenging 25K race won by Valerio Cleri (see photo on left).

The next FINA World Swimming Championships will take place in Shanghai between July 16-31, 2011.