Ecotourism, adventure travel, sustainable tourism, responsible tourism, nature-based tourism, green tourism have entered our lexicon with multiple meanings and interpretation. As our world gets smaller (figuratively) and the world's population grows (literally), mankind's impact on the environment will continue - both for the good and the bad.

From the United Nations' designation of 2002 as the International Year of Ecotourism to the Center for Responsible Travel's goal to transform the travel industry as a driver of positive change, ecotourism has been a building awareness since the term was first used over 30 years.

But with our Earth covered over 70% with water, the global open water swimming community is quietly, steadily and increasingly doing its part on the grass-roots level in this global movement.

These efforts are part of the growing ecoswimming movement.

The Open Water Swimming Dictionary defines ecoswimming as any open water swim, relay, stage swim, race or charity swim that (1) aims to protect, conserve or call attention to the environment or ecology, (2) improve or protect the welfare of marine life or the local area, (3) incorporates education of the natural environment or ecology, (4) is conducted in an ecologically-sustainable or environmentally-friendly manner, (5) is held in areas that are under environmental protection or that protect marine life, (6) aims to create or enhance environmental or ecological awareness, (7) raises money or provides direct financial benefits for conservation, marine life or environmental protection, research and/or education, (8) builds awareness or provides education of a local community or culture, (9) lobbies local governments or officials for access to, protection of or a clean-up of a waterway, or (10) minimizes the impact of mankind on the environment.

The sport has hundreds of examples of admirable solo and community efforts: Lewis Pugh's 1K swim up on Mount Everest called attention to climate change while Aaron Piersol's televised Race for the Oceans in Florida called attention to the conservation of ocean resources and the Bonaire EcoSwim, the namesake of this movement, continues on.

Ecoswim was first coined by Randy Nutt, who founded the Bonaire EcoSwim in 2000 and was the 2008 World Open Water Swimming Man of the Year, after he met Mark Burnett of American television Survivor and Eco-Challenge fame.

Ecoswimming is done all over the world from the Clean Half 15K Marathon Swim in Hong Kong that features the carbon-neutral relay option (where outrigger canoes are used instead of motorized boats) to a new multi-race swim in Acapulco that calls attention to the protection of the fragile coastlines of Mexico. 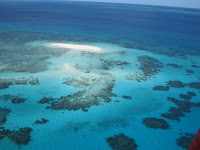 Ecoswims also include charity swims that collectively raise millions of dollars for a variety of causes, such as James Pittar's solo efforts on behalf of the Fred Hollows Foundation, the recent Japan to Taiwan Ocean Swim Challenge and the efforts of the swimmers in the RCP Tiburon Mile over the past decade.

Ecoswimming will not only continue, but expand exponentially as the sport grows with grass-roots efforts around the world.

We tip our swim caps to those in our global open water swimming community who are doing their part to stay green and protect the environment which we all enjoy, utilize and share.