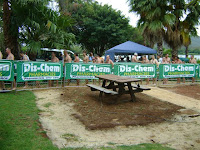 The Dis-Chem Sun City Open Water Swim, with separate 1.5K and 3K races that attracted over 2,300 swimmers, was sponsored by Dis-Chem Pharmacies at the lavish Sun City Resort in South Africa.

The Dis-Chem Sun City Open Water Swim race is being edited for television for sponsor exposure and swimmer enjoyment. 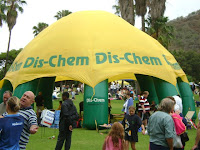 Besides the television broadcast, the race organizers also did a fantastic job with promotional signage at the race on behalf of its sponsor, Dis-Chem Pharmacies.

Signage was visibly apparent everywhere at the start, at the turn buoys, swimmers' corral. 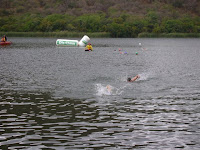 It is this kind of partnership that makes our sport strong and attractive to sponsors.
Posted by Steven Munatones