Shark Study In The Pacific Ocean 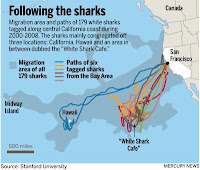 Paul Rogers of the San Jose Mercury News wrote an informative article on the migration of great white sharks in the Pacific Ocean and their occasional travels in San Francisco Bay.

In the article, John McCosker, a shark researcher at the California Academy of Sciences, pointed out that there are no documented cases of the sharks ever attacking seals, sea lions, other animals - or people - in the bay.

Julie Eilperin of the Washington Post also wrote an article on this same subject, with some great photos of the sharks, entitled Great whites near shore more often than believed.