Open Water Opportunities For All 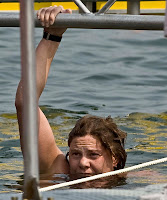 The second International Paralympic Committee (IPC) World Championships to have a 5K race was in Durban, South Africa in 2006.

We are looking forward to the next IPC world championship 5K race in the Netherlands in 2010.

The 2010 IPC Swimming World Championships will be held at the E3 beach in Eersel where the competition will be open class (meaning that athletes from different handicap classes will compete against one another).

Photo of Natalie du Toit after a hard 10K race at the 2007 World Swimming Championships in Melbourne, Australia.
Posted by Steven Munatones