Cullen Jones, one of Michael Phelp's teammates on the exciting 400-meter freestyle relay at the 2008 Olympics, is currently on tour with USA Swimming's Make a Splash program. Cullen, a dynamic speaker and African-American, is making quite an impression from coast to coast with the Make a Splash program.

Cullen's counterpart in the open water may be Naji Ali of California. On October 17th, Naji slipped into the 57°F (13.8°C) water of San Francisco Bay and swam across the Golden Gate Bridge. 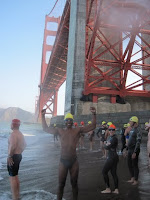 As Naji tells his story, "After 1 hour and 29 minutes, the swim was over. I should clarify that: after 1 year, 1 hour and 29 minutes, the swim was over. You see, the date that I did this swim was also the date – exactly one year ago – that I learned to swim. Like so many other African Americans, I bought into the ludicrous notion that we couldn’t swim. We were meant to play sports like track, basketball and football and I bought into this myth. And if you looked at the stats on drowning, maybe folks were right to say this. Nationally, African Americans and Hispanics drown at a rate nearly three times that of whites."

"That’s one of the man reasons why I did the swim: to hopefully get more people of color involved in swimming and open water swimming in particular. My 10K from the Golden Gate Bridge to the Bay Bridge was only a prequel to what I plan on doing in the open water. I have dreams of swimming the width of Lake Tahoe, doing a relay in the Catalina Channel, another relay in the English Channel and, hopefully, both of these solo swims in the future. But above all, I have one ultimate goal: to get more kids of color into the water and develop great open water swimmers, maybe even the next Charles Chapman, the first African American to swim the English Channel and around Manhattan Island."

We believe Naji's enthusiasm will certainly catch on as the sport grows.