Five Continents vs. Brazil To Claim King Of The Sea 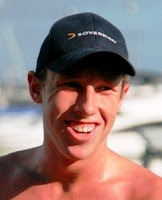 The Sea King Challenge will be held on the 2016 Olympic 10K Marathon Swim course in Copacabana Beach in Rio de Janeiro, Brazil.

It will be quite a battle between the foreigners and the local Brazilians, televised on TV GLOBO and broadcast on the popular Esporte Espetacular program on Sunday, December 13th. After each 2K loop, the athletes will run up onto the sand in front of the TV cameras and then dive back into the beach in an open water criterium race.

In another exciting twist, the ten athletes will race a 400-meter ocean swim the day before the race. The winner of pre-race race will receive a head start on race day over the remaining nine swimmers with everyone starting in order of their finish. So the second-place finisher will start a few seconds behind the winner; the third-place finisher will start a few seconds behind him, etc.
Posted by Steven Munatones