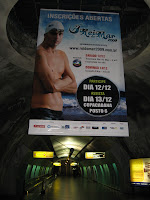 Yesterday, we reported on the very unique and entertaining 10K Sea King Challenge in Copacabana, the same location as the 2016 Olympic Games.

There are huge advertisements promoting this unique event in Rio - on subways and other locations.

On race day, Poliana Okimoto will be awarded Queen of the Sea for her exploits last year. Next year, Poliana will take the challenge and will face the world's best open water swimmers.

On the men’s side, Luiz Lima, who won the South American championship and completed the 36K Desafio do Leme ao Pontal race that covered all the most popular beaches of Rio (Leme, Copacabana, Ipanema, Leblon, Barra and Recreio), will be King of the Sea and is the King of the Sea who will be challenged.

In addition to the King of the Sea challenge, Luiz will be joined by Carlos Pavao, Fabio Lima and Glauco Rangel on the Brazilian team which will compete against the Five Continents Team.

Competing against the strong Brazilian team defending their surf and turf will be a very strong international team representing the Five Continents of the Americas, Europe, Africa, Asia and Oceania.

Alexander Studzinski of Germany, who was ranked 10th on the 2009 FINA 10KM Marathon Swimming World Cup circuit, will represent Europe.

Daniel Katzir of Israel, who qualified for the Olympic 10K Marathon Swim, will represent Asia

Kane Radford, winner of the 2009 RCP Tiburon Mile and one of the most outstanding young open water swimmers on the world scene, will represent Oceania.

In Brazilian and international athletes will not only compete for cash and fight over a challenging 10K ocean course - 2016 Olympics in Rio de Janeiro - but they will be in full view of Brazilian television when they exit the water on each 2K loop with a short run up on the sandy beach to then dive back into the water on a criteriums-style ocean swim.

In terms of quality of the athletes, television exposure and creativity, the Sea King Challenge is one of the world's most entertaining races.