Swimming Across The Gulf Of Finland

Bruno Nopponen, a 34-year-old swimming coach from Estonia, became the first person to swim the 55K (34 miles) from the Porkkala Peninsula in Finland to the Suurupi Peninsula in Estonia, across the Gulf of Finland. 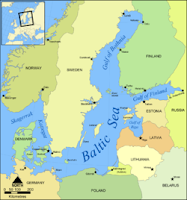 His feat was notable as this body of water was among the most tightly controlled waters in the world from World War II to 1991.

Previously, Bruno also crossed the 27K Irbe Strait (called Kura kurk in Estonian and Irbes jūras šaurums in Latvian). In 2007, Bruno also swam 57K downstream in the Emajogi River from Vortsjarv, the second largest lake of Estonia, to Tartu, the cultural and intellectual center of Estonia, in 11 hours.

According to Avaveeujumine, a previous attempt was made in 1931 by Estonian Aleksander Laas. Aleksander started from Tallinn in Estonia, but due to the bad weather, he stopped on the island of Naissaar near the Estonian coast. After the weather improved, he re-started from the island during the night and after 19 hours of swimming landed on a small island near Porkkala, very close to the place from where Bruno and Priit started.

Priit Vehm, a 35-year-old TV cameraman from Estonia, became the second person in the world to swim 55K (34 miles) from Porkkala to Cape Suurupi, Estonia.

Priit started with Bruno and completed his swim across the Gulf of Finland in 22 hours and 22 minutes.

In 2007, Priit also swam 57K downstream in the Emajogi River from Vortsjarv to Tartu with Bruno, also finishing in 11 hours.

In 2005, he also swam 26.4K between the Estonian mainland and Hiiumaa Island from Rohukula to Heltermaa (see map on left). In 2004, he completed a swim from Rohukula to Vormsi Island.
Posted by Steven Munatones