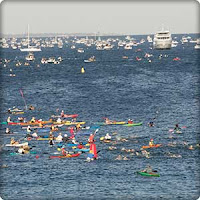 Registrations for the wildly popular 19.2K WAtoday Rottnest Channel Swim will open only from 8 am on November 2nd to 5 pm on November 8th. ext year's 20th Anniversary of the popular The 2010 race, to be held on February 20th, will be the 20th anniversary of the world's most popular open water swimming relay, held in the rough water Indian Ocean between Cottesloe Beach in Perth on the west coast of Australia and Rottnest Island. The event offers a solo category in addition to relays teams of two and four.

Rottnest Channel Swim Association president Ceri Writer, interviewed by the WAtoday, said, "This event is always a great day in Perth's calendar, but with 20 years of achievements to celebrate, the 2010 swim promises to be the best yet. This huge community event includes the spectrum of people from serious swimmers and recreational boat owners to volunteers and corporate and government stakeholders, and we are celebrating them all in 2010. We expect there to be a record number of entries this year for the 20th Anniversary Swim."

The event is so popular, that the organizing committee uses a random ballot system to pick the swimmers, proving the sport of open water swimming is becoming ever more global with an increasing large number of international swimmers from South Africa, England, Ireland, Japan, India and the USA.

For two looks at the 2009 race, click here or here

Photo by the Rottnest Express.