A Hall of Famer, Daniel Carpio, Rests in Peace 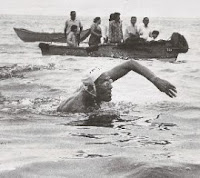 Dr. Nick Olmos-Lau informed us of the passing of Daniel "Carpayo" Carpio of Peru. Carpio, who was 99 years old at the time of his death. Daniel was deservedly inducted in the International Marathon Swimming Hall of Fame in 2005.

He was the first South American to cross the English Channel in 1947 in 14 hours 46 minutes) and attempted the Strait of Gibraltar at the ages of 77 and 83 years.

In 1947, he was awarded the Order of the Sun as a Great Master by the President of Peru and the Recognition Award by the Peruvian Institute of Sports.

His epitaph reads "Daniel Carpio died. A swimmer who crossed the English Channel".

Photo from the ANDINA archives.