Burdened with political pressures on the home front, President Obama will travel to Copenhagen this week to bring the Olympic 10K Marathon Swim to Chicago for the 2016 Olympics.

The IOC vote will be aired and streamed live in America on Friday, October 2nd on Universal Sports. "President Obama and First Lady Michelle Obama symbolize the hope, opportunity and inspiration that makes Chicago great. We are honored to have two of our city’s most accomplished residents leading our delegation in Copenhagen," said Chicago Mayor Richard M. Daley.

President Obama will attend as will the heads of state representing Madrid, Rio de Janeiro and Tokyo. The four finalist cities' live presentations will be streamed at the following times (all times Eastern):

If Madrid wins the 2016 Olympic bid, the open water race will be held in the South Madrid/Getafe Rowing and Canoe/Kayak Channel with a spectator capacity of 14,000, only 12 kilometers away from Madrid.

If Rio de Janiero wins the 2016 Olympic bid, the open water race will be held in Copacabana Beach in the Atlantic Ocean where tens of thousands can gather to watch the athletes in a country that loves its open water swimming.

If Chicago wins the 2016 Olympic bid, the open water race will be held in Monroe Harbor in Lake Michigan with spectator seating of 22,000. With the history of successfully holding the popular Big Shoulders 5K, the Chicago bid is well-prepared on the open water swimming front.

If Tokyo wins the 2016 Olympic bid, the Olympic 10K Marathon Swim will be held in Odaiba Marine Park, a flat-water protected area in Tokyo Bay, with seating for 10,000 spectators and scenic views of incredible architecture and beautiful bridges. 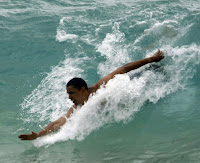 One thing we know for sure: President Obama is the best body-surfer and most comfortable head of state in the open water. With the body surfing form he shows on Sandy Beach in Oahu, and his formative years as a student in Hawaii, it is our guess that President Obama can do at least a 1K in decent time.