Inner Thoughts of a Marathon Swimmer

Ned Denison of Cork Ireland who has completed six swims of at least 16 miles: the English Channel, the Santa Barbara Channel, Manhattan Island Marathon Swim, Valencia, The Great Island and Lake Zurich. We had time to discuss the unique world of marathon swimming with Ned. 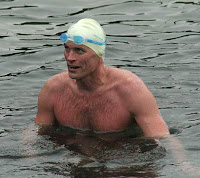 10Kswimmer: What was your most difficult swim?
Ned: The Santa Barbara Channel on October 4th, 2006 in 10 hours and 27 minutes. I completed the swim, but ended up in the hospital for a half day with hypothermia with a core body temperature below 30°C (86°F).

10Kswimmer: What was going through your mind as you were doing this swim?
Ned: The first thoughts were relief. We started in calm seas to travel [to the island where we started] for several hours to the start of the swim. [Then we found ourselves in] Force 5 conditions (29-38 km/h or 18-24 mph). A decision was then taken to move the boat around the lee (Eastern end) of the island. Eventually just before dawn, I decided to swim a different channel that the one I visually planned for during the previous year.

After a few hours the conditions were fantastic.

Only at the end did the conditions change – a deep sea cavern creates an upwelling of even colder water and a unexpected current away from the finish. My wife learned over at one point and told me that I had 'one Sandycove Island lap to go.' This is my training location in Cork and I put my head down and concentrated on counting out 800 right arm strokes. This normally would have taken me 1,800 meters, but with the current, I covered only 300 meters – at this point we all knew that I was in trouble.

10Kswimmer: How often did you think of quitting?
Ned: Thoughts of quitting don’t enter my head. I have a much more subtle thought which goes along the lines of "What are you doing? Why do you put yourself though this? Ok, this is now for sure the last long swim – in the future just enjoy the little one to five-mile swims." This normally kicks in around the two-hour mark, but eventually goes away at about seven hours. After seven hours I just have too much invested and I am driven to get there.

10Kswimmer: Were you concerned for your family if you 'went too far' and hurt yourself during the swim?
Ned: No – never. My wife has more than enough of this concern for the two of us. Then again she was nearly killed when her galloping horse stepped in an aardvark hole in Kenya two years ago. I tell her that it is nearly impossible to get injured falling off the sea.

10Kswimmer: Was there any particular song or words that you repeated to yourself over and over again during the swim?
Ned: Unfortunately not. I am one of those sad individuals who count my right arm strokes. 1,000 strokes and the 30 minutes are up and here comes my feed bottle. Towards the end of the long swim I often have to count to 100 and tell myself that I need another 100 and another. My friend Adrian has a mental tape he plays of him as the king of a South Pacific island and his subjects are bringing his food, kind words and new wives. I have offered to swap metal images.

10Kswimmer: Did you think of food during the swim?
Ned: Never. I just focus on drinking down whatever is in the bottle and keeping it down. This is normally about 450ml of Hi5 carbo mix with water. For comfort (and if my wife is happy with me), I might get a jelly bean reward after each stop. If my spirits are low, I have a thermos of chicken broth on the boat and yell 'broth' midway between feeds. The taste is just fantastic – and it tastes just as good being thrown up.

10Kswimmer: Was there any kind of mental games that you played to help you overcome the cold water?
Ned: I have lots of tricks. First, I have the images of swimming around Sandycove in 7°C (44°F) water in February one year and swimming around one Christmas Day with Danny in a blizzard. So, whatever I am in – is a bath in comparison. Second, I just pick up my head and yell 'COLD' and see the boat crew scrambling to make sure my next drink is hot. Third, I can pick up my stroke rate by 5 to 15% at any time – which pumps more warm blood around my 6'-6" body (yes the wrong shape for cold water). Finally and dangerously, I simply convince myself that the water is now warmer than it was five minutes ago.

10Kswimmer: What advice can you give others who put themselves in a similar situation?
Ned: Marathon swimming comes in many flavors – browse and select the one you actually want. Then build up to it mentally and physically. Too many shoot for the English Channel before they have any real experience above three miles in the open water.

For most swimmers, 21°C (70°F) water is probably their most comfortable over distance. Also, most will find a group swim in a lake mentally easier than a lonely sea solo subjected to currents/tides.

Swimming in water above 24°C (75°F) is a completely different story – and I have no real experience. Talk to the folks in Australia or Fiji.

Colder water – so 16°C (60°F) and below is a different story. Then toss in a strong and cold North wind! I have the luxury of being able to train near to home in cold water. So, by the time my next big swim comes along (Aspirant for Round the Island of Jersey) on August 5th 2009, I will have done long distances in colder and hopefully rougher water and subjected myself to adverse tides.

The warm water swimmers from Australia seem to be able to come to Dover for a week – get used to 16°C (75°F) water and make the channel swim. I have no idea how they do it.

Thank you very much, Ned - and good wishes on your Round Jersey solo swim. We have an idea of what you will be thinking about.

Thank you. Do you have any favorite swimmers - of any age or ability - who you would like to learn more about?

Ned is a great help to all of us swimmers in the cold water community! Loved the interview, he is an inspiration, even when he manages to find shortcuts around Sandycove island. ;)

another great interview...it's amazing the amount of knowledge and experience that is out there and ready to be shared..thanks Ned and Steve..