The Art of Swimming and The Trials of Endurance

Captain Matthew Webb became an endurance swimmer in 1874. On August 24th 1875, he became the first person to successfully swim across the English Channel in 21 hours and 45 minutes on his second attempt. He did it all breaststroke.

35 years passed before the second person replicated his feat.

Captain Webb later wrote a book, The Art of Swimming.

In order to promote the art of swimming as a life-saving skill and to demonstrate that "the man most likely to be rescued in case of shipwreck will not be the one that can swim the fastest but the one that keeps himself afloat the longest time", he settled upon another challenge: a 36 hour swim.

The Lambeth Baths in London, an indoor swimming venue, was the site of the Trials of Endurance in 1879. The winner was the person who covered the most distance in six days (144 hours) of swimming. Of the five contestants, only Captain Webb persisted in using breaststroke rather than sidestroke that was popular at the time. Slow and steady like his English Channel conquest, he easily won the Champion of England title with 119K (74 miles). 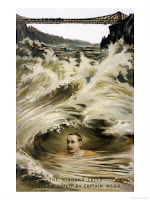 Unfortunately, Captain Webb drowned while trying to complete a dangerous swim through the Whirlpool Rapids in the Niagara Falls in 1883.

The Whirlpool Rapids generated are among the wildest, formidable and most dangerous in the world: rated 6 on a navigatable scale from 1 (easiest) to 6 (most dangerous).
Posted by Steven Munatones