To the best of our knowledge, Maui resident Mike Spalding was the first channel swimmer in recent memory to have been attacked by a shark, although many swimmers from Catalina Island to the Caribbean have been approached by sharks on their solo efforts. 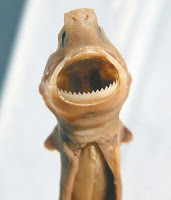 Spalding, a well-known ocean swimmer from Hawaii, had to halt his 30-mile Alenuihaha Channel crossing from the Big Island of Hawaii to the island of Maui about 4.5 hours and 11 miles into his swim.

What is even more scary about the attack is that Mike was hit at 8:00 pm. 15 seconds after feeling a sharp pain on his chest, Mike received a 3″ diameter, 1″ deep wound on the back of his left leg, reportedly caused by a cookie cutter shark (see photo of alien-looking creature).

Spalding had recently been inducted into the Hawaii Swimming Hall of Fame for his seven channel swims between Hawaiian Islands. His attempt of the Alenuihaha Channel was his more difficult one - between the northern tip of the Big Island and the southeast shore of Maui.

True to his nature and less than a day after Australian Penny Palfrey completed her attempt of the Alenuihaha Channel, Spalding immediately knew the consequences of the attack. "I got hit in the calf. It was such a disappointment because I knew the swim was over. I was bleeding profusely."

According to the Maui News, Spalding yelled in pain, quickly swimming over to his escort kayak in the pitch darkness. "I didn't see [the shark]. All I felt was the bite, and I got the hell out of the water as quick as I could." As his escort paddler Buddy McLean helped him get into the kayak, the kayak began to quickly fill with blood. Buddy used a VHF radio to call a nearby support boat for help. The boat and its crew picked up the men and tried to stop the bleeding. Pressure with a towel and an antibiotic were applied to the wound which was covered with gauze and secured with duct tape.

"It was pretty crazy. He got hit twice," said his paddler. "I couldn't see anything in the water, but [I knew] Spalding was in serious trouble because of the way he yelled."

Here is one loud shout out to Spalding's courage and recovery and his support team's fast actions.

Photos by the Maui News.