If there was anyone on the move in the open water swimming world during 2008, it was the unflappable Shelley Taylor-Smith. A true global traveler and a nominee for the 2008 World Open Water Swimming Woman of the Year, Shelley traveled far and wide passionately promoting the sport to athletes, coaches, administrators, media and national federations.

She participated in the FINA Extraordinary Congress in the U.K., the FINA Referees and Officials Clinic in Indonesia, the 2008 World Open Water Swimming Championships in Spain, the Olympic 10K Qualification Swim in Beijing, the FINA Referees and Open Water Swimming Clinic in China, FINA 10K Marathon Swimming World Cup events in Hong Kong and Singapore, the Asian Beach Games in Indonesia, the U.S. Olympic Swimming Trials in Nebraska.

2008 was the culmination of Shelley’s three-decade dream to bring open water swimming to the Olympics.

As the Honorary Secretary of the FINA Technical Open Water Swimming Committee, Shelley was instrumental in planning and pulling off the Olympic 10K Marathon Swim in Beijing. Shelley was able to help create a wonderful venue for the athletes because she knows exactly what the swimmers go through every day in training and during races when things get tough.

In her days as an athlete, Shelley was always focused and tough (see photo on left that shows Shelley fighting the incoming tide during the 37K Atlantic City Around-the-Island Marathon Swim). Her versatility as an open water swimmer gave her to a comprehensive appreciation of the sport.

She not only won 7 consecutive professional FINA world titles, a 25K world championship and the Manhattan Island Marathon Swim five times, she also did a 79K solo swim from Sydney to Wollongong, a 1990 English Channel crossing and a relay triple-crossing of the English Channel in 1997. Her athletic exploits were recognized formally in July 2008 by the International Swimming Hall of Fame which inducted her as an Honor Open Water Swimmer..

Despite her open water swimming accolades and FINA responsibilities from Beijing to Sevilla, Shelley continued to keep her hands in local open water swimming events throughout 2008. She participated in a variety of swims, including the world’s largest open water relay, the 19K Rottnest Channel Swim, and was an active patron for the Ecu West Coast 1000).

"When I first met Shelley, her enthusiasm was contagious and her passion mind blowing," said David Sierakowski, the Ecu West Coast 1000 race director. "Marathon swimming is a unique sport that tests both mind and body to its limits, but life is a team sport. It is all about participation, participation, participation,” explained Shelley who in between her FINA duties runs a very successful motivational company called Champion Mindset.

In addition to her efforts to help create world-class open water events, she also understands the nitty-gritty of the sport, ranging from relations with the media to water quality. Back in 1998 prior to winning her fifth consecutive 48K Manhattan Island Marathon Swim, Shelley was diagnosed with chronic fatigue syndrome after prolonged exposure to polluted waters around the world. She fought back from that disease, and retired from competitive swimming to enter the world of business and the administrative side of the sport.


Her motivational speeches touch upon her experiences in the sport and, most importantly, make people laugh, cry, think and act. With an attention to detail and a passion for everything she does, Shelley also continues to explore new ways to further develop the sport. "I am passionately committed to our youth which is the future of Australia."

"I want to teach, train and share: if you have a dream and you believe in that dream and are prepared to do whatever it takes and never quit...you will make it," a common theme that runs through her speeches. Shelley was recently appointed to the Western Australian Open Water Swimming Committee and has plans on hosting a FINA 10K Marathon Swimming World Cup in her hometown of Perth.

Her interest in pushing the envelope was apparent back in 1991 when she and Tammy van Wisse wore a bikini suit for the first time in a FINA competition. Shelley and Tammy had to seek special permission to wear the bikinis. FINA issued an official news release that stated the swim suits were deemed respectable for competition. However, Shelley was more practical in her reasoning. The 1991 World Swimming Championships were held in Perth, Australia and Shelley knew there would be many jellyfish in the 25K course in Swan River. 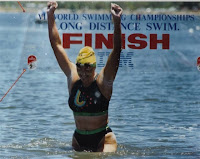 "I wore this [bikini] suit because of the jellyfish that were everywhere…I wanted to be able to let them out [of my suit]…or get them out with easy access and not disturb my mental focus and mindset which they are renowned for doing," recalled Shelley with a smile. "I won the race and gritted my teeth as I got stung." It is now time for the next chapter in the life of Shelley Taylor-Smith.

For her continuous efforts to develop and promote the sport, we salute Shelley as a nominee for the 2008 World Open Water Swimming Woman of the Year.