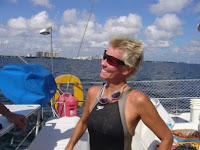 Jennifer Figge, a 56-year-old endurance athlete from Aspen, Colorado, plans to swim 3,380 kilometers (2,100 miles) across the Atlantic Ocean from the Cape Verde Islands off the coast of Africa to Barbados, between Puerto Rico and Venezuela. She will swim behind a sailboat in a giant shark cage for 6-8 hours per day, hoping to finish in 60 days. She swim will begin December 1st.

She has swum across the Straits of Gibraltar, from Tahiti to Moorea, from Turkey to Greece, across the Cozumel Channel, in Sydney Harbor, and 52 miles from Cay Sal Bank in the Bahamas to Marathon in the Keys.

There have been two previous swims across the Atlantic Ocean: In 1998, Benoit Lecomte swam 3,716 miles from Cape Cod, USA to Brittany, France in 73 days, stopping along the way at the Azores Islands. In 1991, Guy Delage swam and floated 2,335 miles alone from the Cape Verde Islands to Barbados.

Whether or not Figge succeeds, it is a testament to her courage, vision and determination - and financial savvy as it is reportedly costing at least $250,000 to attempt the swim - that she is ever planning this marathon swim.

As Figge said to the Miami Herald, "I like being out there. I feel a sense of calm in the ocean, like the sound you hear in a conch shell. I feed off the inspiration of people who have had real challenges. My father died of throat cancer. My uncle was an amputee. I had a cousin critically burned in a plane crash. Those people keep me going."

As Figge starts and continues her epic journey, we will try to provide regular updates.

Upper photo of Figge from her Facebook page. Lower photo of Benoit Lecomte from BBC News.

She has not done the English Channel. This blog attempts covers all aspects of open water swimming. In fact, most athletes covered in this blog have neither attempted nor successfully crossed the English Channel, including 48 of the 50 Olympic 10K Marathon Swim finalists. Jennifer is attempting a solo swim that is her personal goal and is costing her significant money, time and effort. It is amazing to me that she even contemplated a crossing of the Atlantic Ocean and has gone this far in her planning. Similarly, the individuals who have crossed the English Channel are to be applauded for their remarkable efforts. Everyone has their own particular open water swimming goals and passions.

This is only my viewpoint: money (and time) are frequently obstacles for many who wish to do a major channel crossing or solo endeavor. Whether it is the cost of an escort boat or the time spent traveling to and staying in Dover, money is one issue that marathon swimmers must deal with. For some, US$250,000 is difficult to come up with. For others, US$5,000 is difficult to come up with. If we could somehow eliminate the financial obstacles for everyone, I could imagine MANY more people who take up channel crossing challenges. But, financial realities are undisputable. Like Diane Nyad, Julie Ridge, Lynne Cox and many others before her who have attempted and completed unprecedented swims, Jennifer has apparently generated financial support and assistance from various individuals and corporations. This support was garnered because she "sold" interested parties on her dream and abilities to see this dream to fruition. I respect that effort and ability to get supporters excited about the sport of marathon swimming.

Swimming across the English Channel is a standard that many marathon swimmers hold their colleagues to. This is true in other sports (e.g., Mt. Everest in mountain climbing) and endeavors (e.g., publishing a book for writers). But achieving the commonly accepted standard is not necessarily the dream of everyone. Jennifer is an example of this.

I think this is one of the great things about open water swimming: we can dream to do great things because the world offers us so many different venues, conditions and opportunities to enjoy the sport.

I found my answer here Steve...

I am in agreement that there are many ways for a swimmer/athlete to realize an "impossible" dream.

It seems when an individual can set their sight on accomplishing a goal to inspire others instead of for their own glory, the climb becomes easier.

A team is created and all the needed support and demands are offered and absorbed by many caring individuals.
The miracles just unfold as one person's strength is magnified by many who care for the goal.

It is no easy task to be a giving and inspiring individual.
There are obligations and demands that come along with the training and the goal. This is where the self-serving athlete will find challenge.