Commonalities between Birds and Swimmers

When it comes to working efficiently, birds, cyclists and open water swimmers have something important in common. In a article in Wired Magazine, Ken Thompson has a theory called organizational biomimetics.

According to this theory, geese and other animals naturally form groups whose principles that are widely known and used by cyclists and open water swimmers. 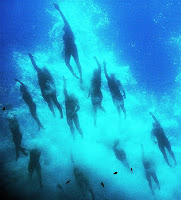 For example, when geese fly together in a V formation, the birds rotate in and out of the lead position.

This instinctive movement is performed both to conserve energy and because no single bird has memorized the flock’s entire route.

According to Thompson, collective leadership is the norm in much of the animal world. 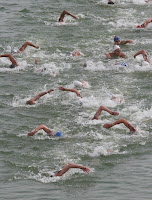 The open water swimming community knows - and feels - similar movement is also to their advantage.

Open water swimmers training or competing in a pack instinctively feel and know that those athletes behind the lead swimmer can conserve energy and that the task of leading the group falls upon the lead swimmer.

As the lead swimmers or cyclists rotate out of the lead position, the group itself can maintain a higher pace and greater efficiency in achieving its goal.

Underwater photo of open water swimmers at the European Open Water Swimming Championships demonstrate these principles and were taken by Giorgio Scala.