From 1964 to 1982, Robben Island was the prison for Nelson Mandela. Today, the island is a World Heritage site and offers one of the world’s great channel challenges.

Since 1899 when Henry Charteris Hooper swam from Robben Island to Cape Town, nearly 300 individuals have successfully swum between the mainland and Robben Island. The distance varies depending where one starts and finishes, but it is approximately 7-11 kilometers with very cold water.

Former top professional marathon swimmer, Christof Wandratsch of Germany holds the record for the fastest crossing while Theodore Yach, a local businessman, has made 53 separate crossings of the channel to date.

The channel is also an extraordinarily scenic challenge with the expected abundance of marine life. 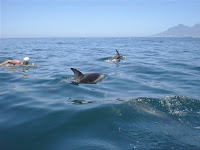 During a double crossing, Graham Grindley-Ferris was joined by a pod of dolphins. Graham’s story and additional great photos can be found here. For more information about such swims, go to Cape Swim which is run by the Cape Long Distance Swimming Association.

Photos from the Cape Swim website.
Posted by Steven Munatones