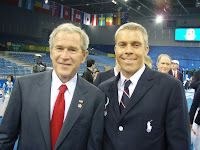 The following is a first-person account by Mark Warkentin's of his experiences just before the Opening Ceremonies. His humor and genuine appreciation of the honor of being an Olympian are obvious:

A short bus ride took us [the USA Olympic Team] to the Fencing Arena, the location that the American athletes would meet President Bush. Fortunately the President was a bit late in his arrival, so all of the American athletes got to loiter around and take pictures with one another. This is when I became a member of the self-paparazzi. Here is the transcript of almost every conversation that took place:

The whole experience took me back to my high school prom, and, just like prom, the coolest kids in school arrived last. Just as soon as we had finished exhausting ourselves in self-adoration, the most recognizable athletes on the planet arrived. I succumbed to temptation and joined the other athletes as we tried, as maturely as we could, to get photos with NBA stars. 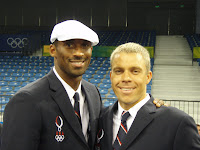 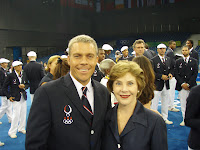 My first great photo was with the First Lady, who was really nice, and we engaged in a bit of chit-chat on swimming. I then made my way over to the First Daughter to get a picture and, absentmindedly, I nearly asked someone in the Secret Service to take the picture. Fortunately I caught myself before asking the serious man to do something very silly. I stopped, reminded myself that I was acting like an idiot, and then found a person not carrying a gun to take my picture. 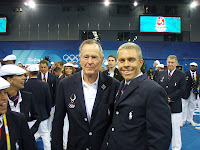 I then got a picture with the former President, a man who wasn't really interested in me at all, but gave me the obligatory 3 seconds needed to get a photo with him. Afterwards I tried to imagine how much of his life has been wasted waiting those 3 seconds for the camera to take a picture.

After about an hour of waiting it was time for the Swimming delegation to get a picture with the president. Erik Vendt and I had exchanged cameras a few minutes earlier when we hatched a plan to each get a personal picture with the President even though earlier in the evening we had been told that this would not be possible. We were told that a group picture would be taken and then mailed to us. However, we noticed that some of the athletes in the other disciplines had managed to get personal pictures anyway, and so Erik and I were determined to get ours as well. If you know Erik, it will not surprise you when I recount what Erik told me just before we met the President:

"Mark, no matter what ANYONE says, you get a picture of me with the President."

For some crazy reason this actually made sense at the moment. It wasn’t until afterwards that I thought about the insanity of DEMANDING on getting your way when you’re 2 feet from the President of the United States.

Erik got to the President before I did and thus he engaged Mr. Bush in this conversation:

Erik: "Mr. President will you be at the swimming finals on Sunday morning?"

President Bush: "Sorry, but I'll be going to church on Sunday morning."

Erik: "I thought there wasn't church in China."

Somewhere around that last line I took the picture for Erik, and then, lacking anything really profound to say at the moment I gave Erik the signal to hold up his end of the bargain.

Mark: "Mr. President can I get a picture with you?"

President Bush: "Sure you can."

I know, I'm pretty weak. But, I got a picture with the President at the Opening Ceremonies of the Olympics, so I’m okay with being tongue-tied in the moment.