The Day the English Channel Record Was Set 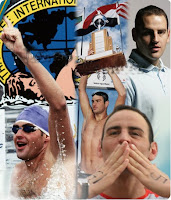 Petar Stoychev of Bulgaria set the English Channel record in August 2007 in 6 hours, 57 minutes and 50 seconds, the first person to break 7 hours. The personable and outgoing Stoychev became the first person to cross the Channel (formerly called the Dover Strait) in less than 7 hours. Stoychev's historic swim is an example of the determination possessed by all successful English Channel swimmers.

Two months before, in June, Stoychev and his support team patiently waited on the English shore for the right conditions.

With funds, patience and time running out, Stoychev returned home after ten straight days of cold, windy and rainy weather.

Disappointed but undaunted, Stoychev told his boat captain, the renowned Michael Oram, Honorable Secretary of the Channel Swimming & Piloting Federation, to call him if the conditions look favorable after the 2007 pro marathon swimming season was over.

Like the six previous years, Stoychev competed on the FINA Open Water Grand Prix tour and captured his seventh consecutive world professional marathon swimming title. After the pro circuit, Stoychev went on vacation to the Black Sea with his pregnant wife and set his sights on the Olympic 10K Marathon Swim in Beijing for 2008. "I was relaxing, just enjoying the beaches and only swimming a little."

On Tuesday afternoon, August 21st, Oram unexpectedly called Stoychev and told him the conditions looked favorable for a Friday swim. Excited, he started to call around for air flights to England as soon as he got off the telephone with Oram. However, no tickets were available for a few days. He was also worried that he had not been swimming enough for a record attempt. "I had to find five tickets on short notice, including tickets for my wife, sponsor and a cameraman. We finally arrived around mid-day on Thursday and met Michael in Dover," said Stoychev.

"Tomorrow looks good, advised Oram who was getting his boat prepared.

Stoychev went for a warm-up swim at a nearby pool in Dover and unexpectedly met long-time rival, Yuri Kudinov of Russia. "Yuri told me he was also getting ready to swim," recalled Stoychev. Earlier in 2007, Kudinov handily beat Stoychev at the World Swimming Championships in Melbourne in the 25K race. Kudinov was acknowledged by many as one of best marathon swimmers after compiling three 25K victories at the 2001, 2005 and 2007 World Swimming Championships, beating Stoychev each time. "On Friday morning, I woke up and had breakfast and coffee," said Stoychev. "Then I went down to Shakespeare Beach to get ready [for the Channel]."

Stoychev started at 10:11 am under fair – but not perfect – conditions. Unbeknownst to Stoychev, Kudinov started 25 minutes behind him and started to chase him down. "After the second or third feeding, I was told [Kudinov] was closing in on me," remembered Stoychev. "I imagined that I would set the English Channel record and then only have it for a few minutes before it would be broken by Yuri."

Stoychev took it as a challenge and the race for the record was on. All day long, Stoychev surged and Kudinov responded. Back-and-forth the battle went between the two finest marathon swimmers in the world...in the most famous channel in the world. The athletes were wasting no time at their feedings and constantly maneuvering their course. It was clear that the conditions were made for a record attempt, but the Channel would have to hold up for a record to be set – no matter what pace Stoychev and Kudinov were swimming.

"It was like a race. The distance between us was almost constant throughout the Channel." Towards the end, Stoychev pulled ahead. "Over the last 2 hours, I was considerably faster and was able to finish 8 minutes faster than Yuri." Stoychev finished at Cap Gris Nez at 6:08 pm with Oram at the helm and Alison Streeter, the 'Queen of the Channel', as one of the official observers.

"I will always be the first man to complete the Channel in under 7 hours," said Stoychev as he talked about swimming the 1500-meter freestyle and the Olympic 10K Marathon Swim in Beijing. "If I do not get a gold medal or place in the top 3 at the Olympics, then no one will remember me. In some ways, the Olympics require some luck because it is a race that happens only once every four years...but people always remember the English Channel."

"Continuing my career will depend on my results at the Olympics," continued Stoychev. "I have a 3-month-old daughter now and I must work for my family. Ultimately, I want to become a member of the FINA Technical Open Water Swimming Committee and work to develop marathon swimming around the world. Back in 1993, I did my first race. I wanted to have a chance to travel all around the world and meet different people. I have been to beautiful and exotic places because of marathon swimming. When I studied geography in school, I could never imagine that I would be able to travel to places like Canada, England and Asia."